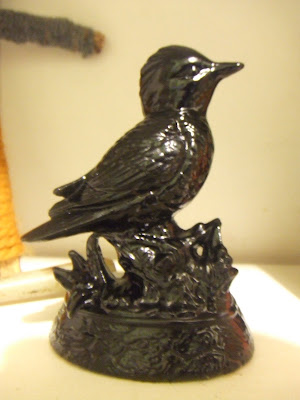 Yesterday I made a stop at the local thrift store nearby. One of the things I picked up was a peeling gilded bird that didn't look like much but I had good potential. I brought it home and promptly applied black semi-gloss spray paint. I love the way it looks now. 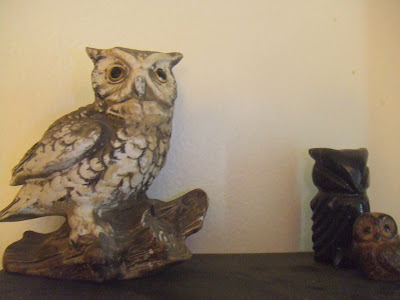 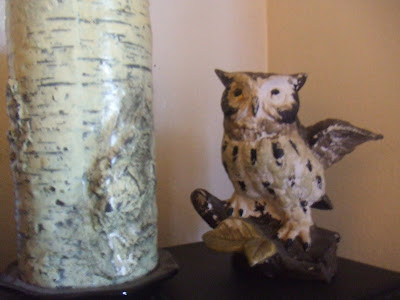 I also scored on two worn out little woodland owl figurines. I was thinking of spray painting them as well but thought maybe I should keep them in their current state. I think they tell more of a 'story' this way. 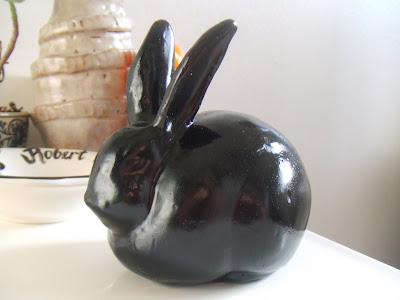 Besides a cute little folksy skirt, the last thing I picked up was a small terracotta rabbit. I spray painted it black as well (partly inspired by the black hare) and I just love this cute little guy all the more!
Yesterday was also another day of halloween crafts for the girl and I. We decided to make a few creepy characters by recycling TP rolls. I drew partly on them as a guideline for her and she used paints to colored them in and also drew their faces. I think we are both pleased with the results and she wants to use them as big finger puppets :) 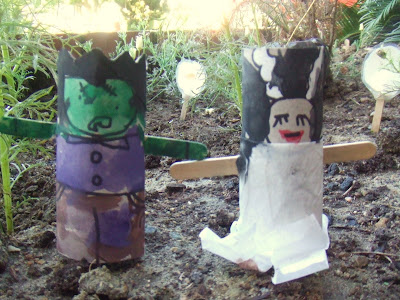 For Frankenstein and his bride, we inserted popsicle sticks for arms. I cut the top of the roll to mimic wild hair for him and used a folded coffee filter for the bride's dress. I left one side a little longer, glued and wrapped the dress around a made little slits at the bottom so the dress would come up a bit. 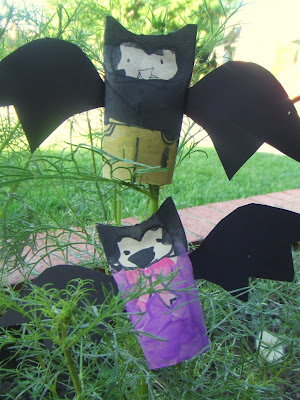 We also made a bat boy and girl (or little vampires if you will). I cut a little semi-circle at the tops to create their bat like ears and then glued the front and back part together for the head. After, she drew and painted on them and again I used a little exacto knife to cut slits for their bat wings. I cut the wings with little inserts to slid through the slits and then glued the back of the wings to where it was inserted. 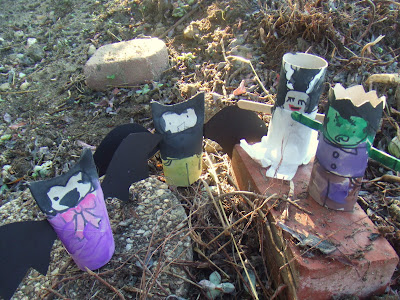 Look at our monstrous family! 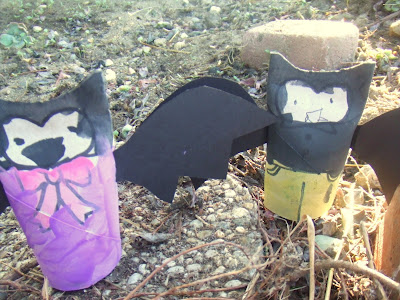 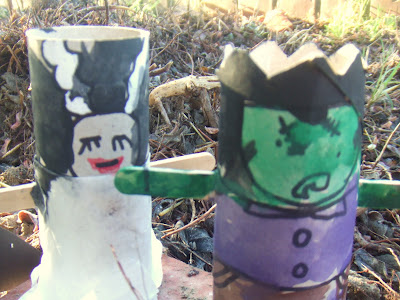 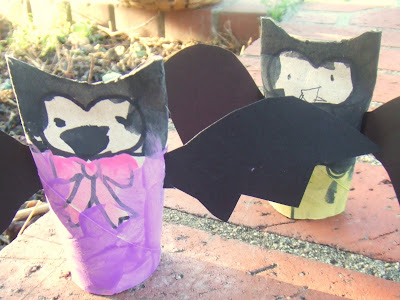 Email ThisBlogThis!Share to TwitterShare to FacebookShare to Pinterest
Labels: a little crafty time, halloween delights, thrifty goods, what we did

katrina and the king said...

just love the "my loves" picture in your sidebar :) :)

What sweet thrifty finds, and fun crafts! You are definitely going to be ready for Halloween at this rate!

These are so cute! Do you put a finish over the spray paint, or just spray and dry? :)

spray paint a knick-knack...what a wonderful idea!!! I love the black.
your daughter makes such cute things! Such a sweet talent (and I see where she gets it from!)

oh my! what a fun autumn you're having! love all your little treasures, and Nat has been very busy being an artist! She'll have her own etsy in no time ;)

meg--i just sprayed a semi-gloss several times. i really do like the way they came out.

and thank you everyone who left a comment too, they really make my day!

p.s. heather--i know she wants her own shop. she is going to help me when we finally set up a herb and flower etsy shop!

what I am reading


Artwork & photos are my own, Copyright © Andrea Gutierrez, 2011. All Rights Reserved, unless otherwise noted. Please do not use without credit or for any use other than personal. Thank you.
♥